I tried to make bread today. Yeah, I know…bread right?

I have only ever made it in a bread making machine before, but my friend Hils has recently begun to make her own bread and I was inspired to have a go myself after she shared a loaf of focaccia bread with me last week. Hers was delicious. Packed full of sun-dried tomatoes, olives, rosemary, garlic and red onions… I had to try it for myself!

So today I tried.

D’ya wanna see how I got on?

Well let me tell you, finding a recipe for a “standard” focaccia bread is nearly impossible. So many to choose from! With water/without water; with lots of oil/with only a drizzle of oil; with sea salt/with rock salt; with/without toppings and fillings… The list was seemingly endless.

Once I had weeded out the ones I could understand the measurements for, (note to my American friends: how on earth do you manage with cups of stuff??) I settled on what seemed to be a fairly easy one to a) measure out the ingredients, b) understandable terms like “fold” and “knead” and c) wasn’t going to take up the whole afternoon to make.

It turns out the one I chose was by Paul Hollywood and if you know your bread and your bread masters, then you will know that if it has Paul Hollywood’s name on it then it was going to be a cracker. I remember seeing him make this on GBBO a couple of seasons ago and there were certain tips gleaned from there that I remembered as I went along. “Oil your work surface” being the most important – or so I thought.

This is how the first mix went:

Not pretty is it?

I turned it out because no matter how much I “folded” it in the bowl, it was still the consistency of porridge and was sticking to my hands and fingers so badly that I was starting to look like I had webbed feet instead of human mitts.

Pretty soon though, I had a lovely smooth (if very sticky) dough. 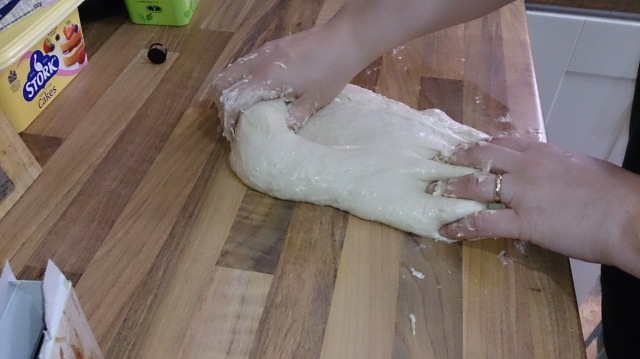 Now, if only it had stayed at that consistency I would have been so pleased! But it seemed that Paul Hollywood’s tip of oiling the workbench just made the dough stickier and more slippery in my hands and soon returned to a horrid gloopy mess. I can’t share a picture with you because I was so traumatised and Kevin was laughing so much, between us we couldn’t operate the camera.

Anyway. I managed to get it into a lump/mass/blob of goo and get it back into the bowl after about 15 minutes of wrestling – sorry “kneading” – it on the worktop.

This is what it looked like (please ignore the bottle of gin at this point. It was purely medicinal):

The recipe said to leave it for “between 1 and 2 hours in a warm place, or until it had doubled in size”. Well, to the master Paul Hollywood, he might remember what his goo looks like and be able to calculate what “double in size” actually is, but I’m not a master nor am I Paul Hollywood!

I had to recover, so I took my medicine with me to the living room and caught up with last night’s X-Factor for a couple of hours and when I returned, THIS is what greeted me:

Alleluia!!! It has risen!

I turned it out onto the worktop again (floured this time because my friend Hils said it might be in need of a bit of “dry”) and managed to get it kneaded for about 20 seconds before it returned to its original gloopy/porridgy mess. Now, Mr Hollywood’s instructions said that I would have a “lovely soft dough” at this stage.

I had the Quatermass experiment going on in my kitchen and I was not winning the fight by any stretch. Not even a gluten-filled one.

Next was to “cut the dough into two equal portions”. Well let me ask you, dear reader, have you ever tried to cut a bowl of porridge in half? With a knife? If you have, you will know that any incisions made are quickly swallowed up, and there is no such thing as a “cut”. Same with my dough.

A little tip for PH when he rewrites his recipe, I would suggest that this stage is reworded to “separate the lumpy, sticky fluid into two blobs as best you can and if you manage to get them equal sizes then well done you!”.

I then pressed the two bits of “dough” (I’ve run out of synonyms for “sticky porridge”) roughly onto two baking sheets and covered them up with two damp tea-towels. I was reminded of what they do at the scene of a sudden or unexplained death. Can’t think why…

Quickly put out of their misery, I left them to it for about 15 minutes (a moment of self-preservation more than anything) and then finished them off with oil, rosemary and sea salt.

They didn’t look too bad going into the oven.

And so there they lay for 30 minutes or so to bake, as per Mr Hollywood’s instructions. More “medicine” for me…

We have an electric oven and the temperature is fairly even throughout it. So how on Earth did THIS happen?? 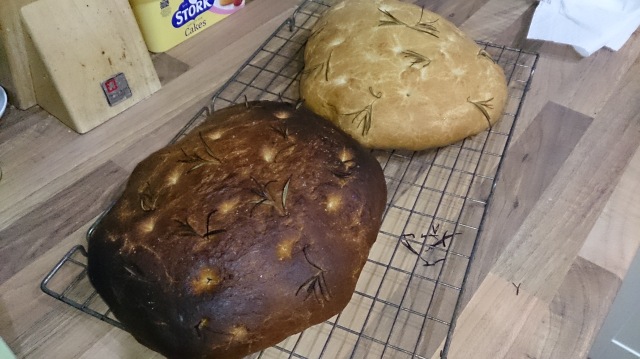 Looks like I got Ebony and Ivory focaccia bread there!

To be honest, after the massive fight I had with that dough at the various stages of mixing, kneading, rising, kneading, shaping and finishing, I’m mighty pleased with the results, even though they are two-tone in shade.

We ate the darker one (tasted really good and the texture inside was lovely, springy and had a beautiful crust – Paul Hollywood would have been proud!) and I have put the lighter one in the freezer for later in the week when I can summon the energy to wrestle with more ingredients to make some soup or something. I might even give it to my friend Hils as a thank you for introducing me to this new fascination of mine.

I can’t see me making bread every day, but after the fight I had on my hands today, I’ll certainly be giving thanks for those who do provide us with our daily bread.

3 thoughts on “Our Daily Bread”

I'd love to hear your view, please leave a comment! Cancel reply

This site uses Akismet to reduce spam. Learn how your comment data is processed.

Hi, welcome to the Mushy Cloud. It is a blog that reflects its author - a bit of everything, hopefully something you'll find interesting, occasionally quiet, but always on hand to listen.

Looking for something in particular?